On the record again

After a long break it's time to update the records.

"Meander" went into the Melbourne International Flower & Garden Show. No sale and no prize but it looked pretty well there. 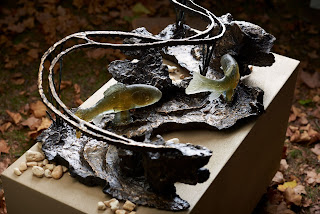 Lucky for me - and a pretty impressive compliment the work sold later to one of my suppliers... it's gone to a very loving home. Wow!

So on with the show fortified by that bit of confidence raising I worked on the inspiration of Shakespeare's Sonnet 29... and thought of the emotional lift at dawn when the birds go up all together.

The process was prolonged... finding the form and then figuring how to make it... and then transporting the wax in its frame hanging by bits of jute string to the foundry.... Mal Wood is not only skilful but extremely courageous!

And so the work was exhibited at the Association of Sculptors of Victoria Annual and Awards Exhibition - to prize winning acclaim! An honour! Lucky me!

Posted by Jenny Sculpts at 5:46 PM No comments: 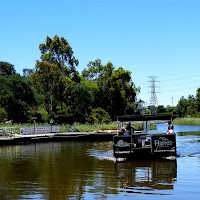 Herring Island in the middle of the Yarra River is a great place - it appears to be natural bush but the Friends of Herring Island will tell you the long and arduous battle they have had to get things to grow. But it's coming up a treat as pioneer natives give way to something closer to a community. The Association of Sculptors of Victoria runs a show as part of the Herring Island Summer Arts Festival - in 2019 from 12 January to 3 February.
So I put two works in:
"Sun and Moon" and a new one "Meander"


"Meander" is a continuation of the bronze and glass story - and the subject - maybe a lament for the Darling River - was intended to find an echo of sunlight through water and the re-wilding of rivers.

Posted by Jenny Sculpts at 5:19 PM No comments: