I was looking for a clip of waster moulding in plaster - I found this... but is there something better?

Posted by Jenny Sculpts at 8:37 PM No comments:

The bottom fell out? 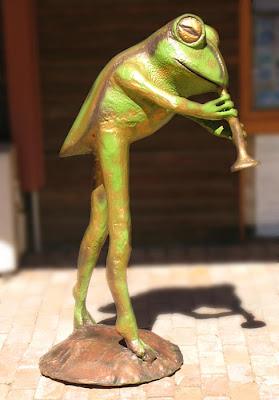 So we live in a contracting economy? Not the first bubble to burst but this could be one of those crashes that they warn us about in the Limits to Growth... followed by oscillations until we reach some sort of stability. If it were not so obvious that humans only respond to crises then we could plan for an orderly contraction to a reasonable level of consumption and production so that we had a pleasant life without over stretching the environment.

You could start by saying that for mortgages the ratio of equity to the total price will remain fixed - except for repayments - so that as the value of the house drops the size of the mortgage drops - the bank absorbing the pain just as the home owner does.... not so silly really - just a spreading of the risk and it would mean that people on a mortgage won't be so pressed to use their stimulus package money for debt reduction. They'll know that their house will always be worth more than they owe on it.

And of course when (if) the economy picks up again the ratio will be preserved up to the point it was at in 2007. So for someone who just sits tight and spends their money they will be in the same position (and so will the bank) at the end as at the start. So you can spend the stimulus package money on a solar hot water service, or buying green power, or a bike....

If you know that things are going to contract why not do it sensibly and work out what we want to achieve - it is like moving to a smaller house - it is a blessed relief to throw out/sell/recycle/give away all those things that you don't really want and that are not contributing to your happiness. Much of our wealth is a burden - why are we so obliged to run the rat race? There has to be a better way.
Posted by Jenny Sculpts at 11:45 AM No comments: